I keep getting an error that says: "The type or namespace name 'Tilemaps' does not exist in the namespace 'Unity Engine'. Are you missing an assembly reference?"

Hi there, Juan. Two things to look for here:

First off thank you very much for this amazing tool! I am having issues though,Top is old tiled2unity import bottom is SuperTiled2Unity. Why is there such a dramatic size difference between the two of them? Also do you have update documentation because the one on the site isn't very helpful. 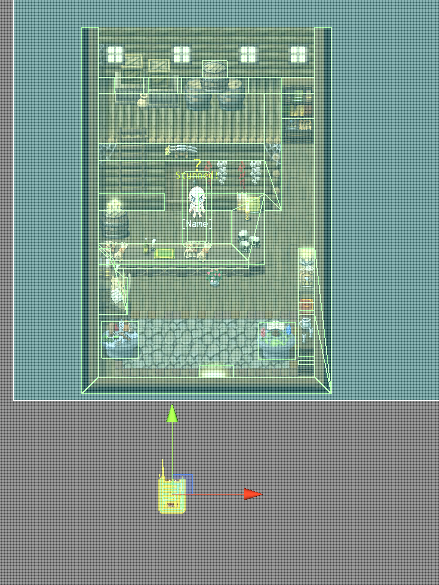 When I set it to the same Pixels Per Unit as Tiled2Unity the size is the same however the level is separating all of the parts by a lot. 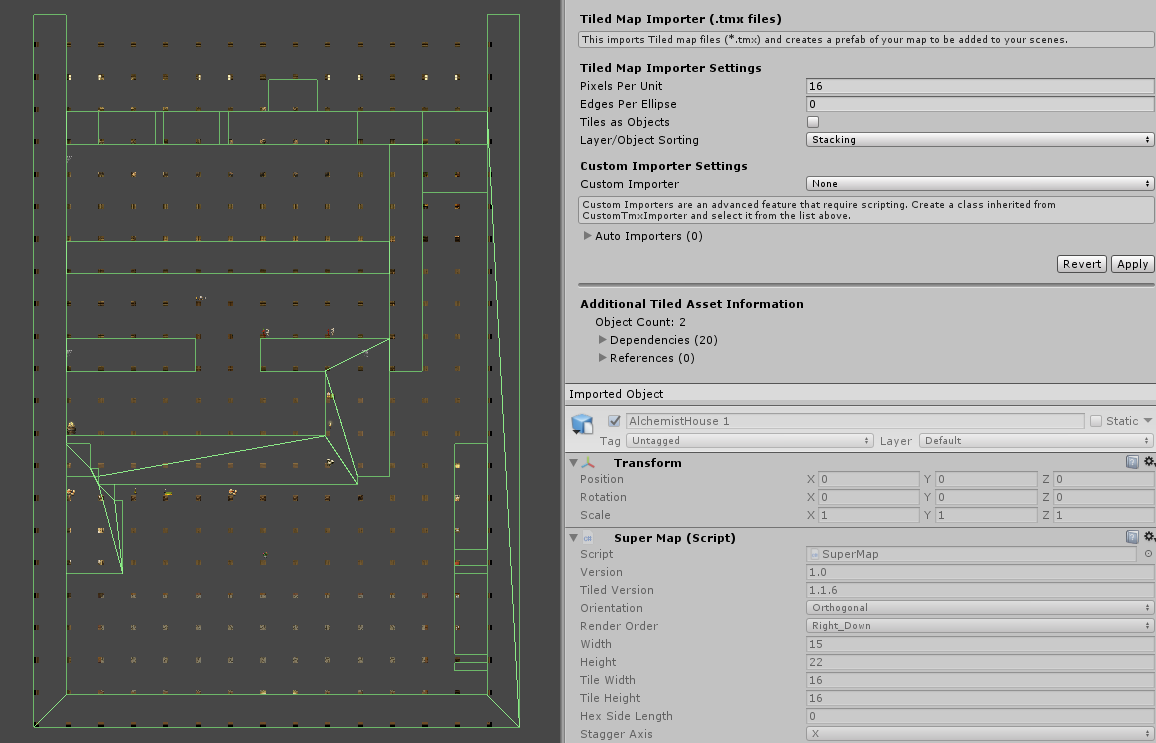 Hi there. Sorry for the lack of documentation. Your tilesets also have a Pixels Per Unit option on them and I'm guessing in your case they are still at the default setting of 100.

Fixing the PPU has fixed the scaling issue, however I am now having collider issues with the maps. After importing the maps I have to go back to the map and set the Edges Per Ellipse to 0 and apply it before it sets the colliders correctly. After doing so the EPE sets back to 6. Is there a way to resolve this issue so that I do not have to change the setting and apply it on each map after importing?

With my current setup I have a rather large map that is chunked out so that it only loads when you are near them. With the issues I am having above I cannot use this setup because of the issues with the colliders. I need this system so my game is playable via mobile devices.

Hi there. Why are you setting Edges Per Ellipse to 0? That shouldn't be allowed as we need some sensible number of edges in order to approximate elliptical colliders with polygonal shapes. If you have elliptical colliders in your tilesets that you don't want imported can not remove them in the Collision Editor in Tiled?

It’s the only way the colliders will show properly for me inside of unity after importing them. Unless I am doing something wrong.

It sounds like you might have encountered a bug. Can you send me a Unity Package of your project? You must be doing something I haven't accounted for. (sean@seanba.com)

I am having the same issue as this person and I cannot find a solution, no matter using T2U or ST2U. Basically, in Tiled it is seamless, but not so much in Unity. Any recommendations?

I finally figured it out! Once  you import your map into Unity, click on the prefab. Change Layer/Object Sorting to Overhead Static, press apply, and it should be fixed!

thank you for sharing!

Is there any documentation for this at all? I followed a youtube tutorial to the letter but things are not working at all. I imported each of the required files, but even though I imported the .tsx , when I import the tileset image it references the .tsx doesn't read it at all. Keeps saying that the image is missing from the very original location that has nothing to do with unity.

Can you export your project in Unity as a Unity Package and send it to me (sean@seanba.com)? I concede the documentation is light but I was also hoping it wouldn't be required. BTW, what youtube tutorial are you following?

Thanks for the response. I found out what my issue was and fixed it. Basically what the issue was, is that when it's imported into Unity, I have to have the exact same folder organization set up as what is on the desktop. Should have been a no brainer I guess but I kept not seeing it for a while. I like to keep things nice and tidy with my files, So for instance, I had my TileD tilesets seperate from where my map was on my folder layers, and then I had the tilesets images also saved in yet another folder that was further organized into subfolders and so forth. The key important factor was I needed to A) Make sure that wherever I save the TileD maps, that any of the tilesets and images need to be on the same level or within folders derived from the folder the map is in.  Then in unity, if folders were used to seperate things, then they need to be made in unity and placed in the same manner so that it can locate it correctly.

The tutorial I used was:

But basically because I was using folders to organize things for TileD outside of unity, I just had to copy the file hiearchy in unity for it to find it correctly. Lets just say learning this I reorganized how I had everything organized so that I didn't have a long string of folders to get to the tile image I needed. Sorry if this response makes no sense, sometimes I have a hard time explaining what's going on in my head.
Reply
searle2 years ago

Super easy to use, and very helpful. Thanks for all the work!

I join itch.io to support an old game, and then I find this awesome tool and haven't even used it yet. I know I've been seeking something of a tile creator, this looks to be it! Thank you.

This is excellent, thank you.

Doing a great job!!! This thing is amazing!

I downloaded Temporus Rouge cause it looked dope. I really like the way the page is styled too. I am not sure where to reach out to, but I am having trouble playing it on my android devices. On my old Samsung tablet it runs, but diagonally cuts off half the game display. It wont even install on my relatively new android phone. When i try to install it just say not installed. Will there be any fixes for android?

I'll check it out, but i think the main issue is it's built for desktops. I might need to revisit the phone controls and see what's up. There is a chance it's not 100% baked.

Thank you for your reply. I got it working on my phone. Turns out there is an android issue when installing  from  unknown sources.  My only issue now is the display.  It cuts off half the game play screen, but at a diagonal angle.

I am having trouble running Temporus Rouge on android.

Thank you so much for this amazing tool.  With it, I was able to make the levels for my game Escape Hero VERY easily.  I cannot overstate how helpful this tool was in my gamedev pipeline, well done!

Thank you for the supportive comment. Good luck with your game and let me know when you're ready to show it off. :)

Actually, I released a 1-month dev time version of it right here! https://spiritstone.itch.io/escape-hero

Right on. But let me grab a gamepad controller before I try that again. This is Super Meatboy-like difficult! :D

Thank You for sharing this great tool!

Currently I’m bussy with non-gamedev stuff, but if I will have a chance to use SuperT2U in the future, I will sure make a donation.

Have a good day!